Something happened. Something bad.

When you woke up, you had a new arm. Metallic, strong, better than your original one, really. All but for one thing: the micro-AI that controls it isn’t in sync with you. Sometimes it does what it wants, or does things to a greater or lesser degree than you’d like. Sometimes it’s like it takes control of your whole body. Like it has its own agenda.

Your insurance doesn’t cover a replacement, upgrade, or even a diagnostic, so you’re going to try to figure out how to live with it.

Arm is a two-player game where each player thinks they're the person and the other character is the arm. It's personal and intense. Enjoy!

Every copy of this game that is purchased also provides a community copy for someone whose budget can't allow them to buy one. If you're in that position,  please claim one of these copies for yourself.

I had a wunderfull game of Arm yesterday. We played a young street musician. The game went very unexpectedly, not so much a clear pulling in two different directions as two forces that were either pushing each other up or dampening each other.

We ended up with a little rule ambiguity. We both had four dice left for the last decision and we both used them up on the final roll. So we ended up with zero at the same time. It was no problem for us to end the game, as we were very much on the same page as to what the ending should be. But if it hadn't been for that, who would have been the one to get final control in such a situation?

I think handling it with story is the perfect way to go about it. No notes, excellent job!

Yeah it would be. Safety tools very required. 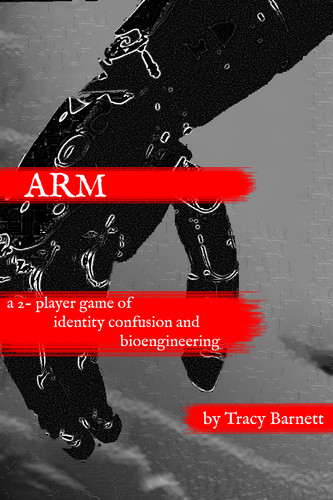